When Hiring, Attitude is Everything for +HSHA 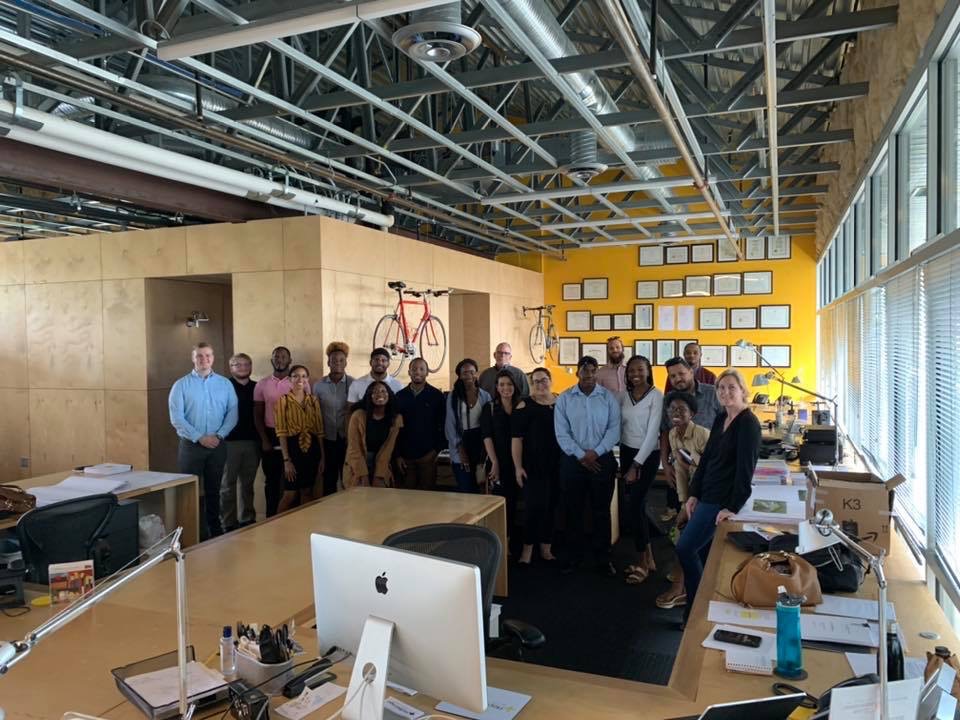 Architectural firms face challenges when it comes to hiring new talent. Too often, firms report struggling with bridging the gap between attracting quality candidates and getting them up and running into employees that contribute.

We’re bringing you the story of how one ARCHICAD firm, Hoy Stark Hagan (+HSHA), which has hired six new employees recently, has adopted some tried and true practices that are working to help them overcome that challenge.

Hire for attitude, tech savvy is good but adaptability to culture is more important.

As much as +HSHA wants to bring in skilled, technologically savvy employees, the driving element for them in hiring a new staffer always comes back to attitude. The truth is, according to +HSHA not everybody is a good fit. The team has had employees join that at first blush are received well, but as the learning process moves forward or as the workload gets heavier, they don’t work out. +HSHA hires candidates that know a about the firm, what they’re looking for, and their reputation.

Reputation and attitude go a long way at +HSHA, even down to their choice of software. “ARCHICAD is being used in our office as much right now because of attitude, not just what it can do but because of the attitude of the company and how it’s been represented to us, and how we’ve been supported by you guys. You know Revit’s a powerful software. Revit hasn’t shown us the same attitude that GRAPHISOFT has. GRAPHISOFT has been sensitive to our needs and appreciated what we needed as an architectural firm. ARCHICAD makes sense for us.”

Pat Hoy sums it up this way, “If they don’t have the right attitude, I don’t care how technically capable they are. They’ll be know-it-alls, and that doesn’t fit in the studio environment. That’s just very off-putting to everybody. We want them to want to get involved with learning the software and with the firm culture.” 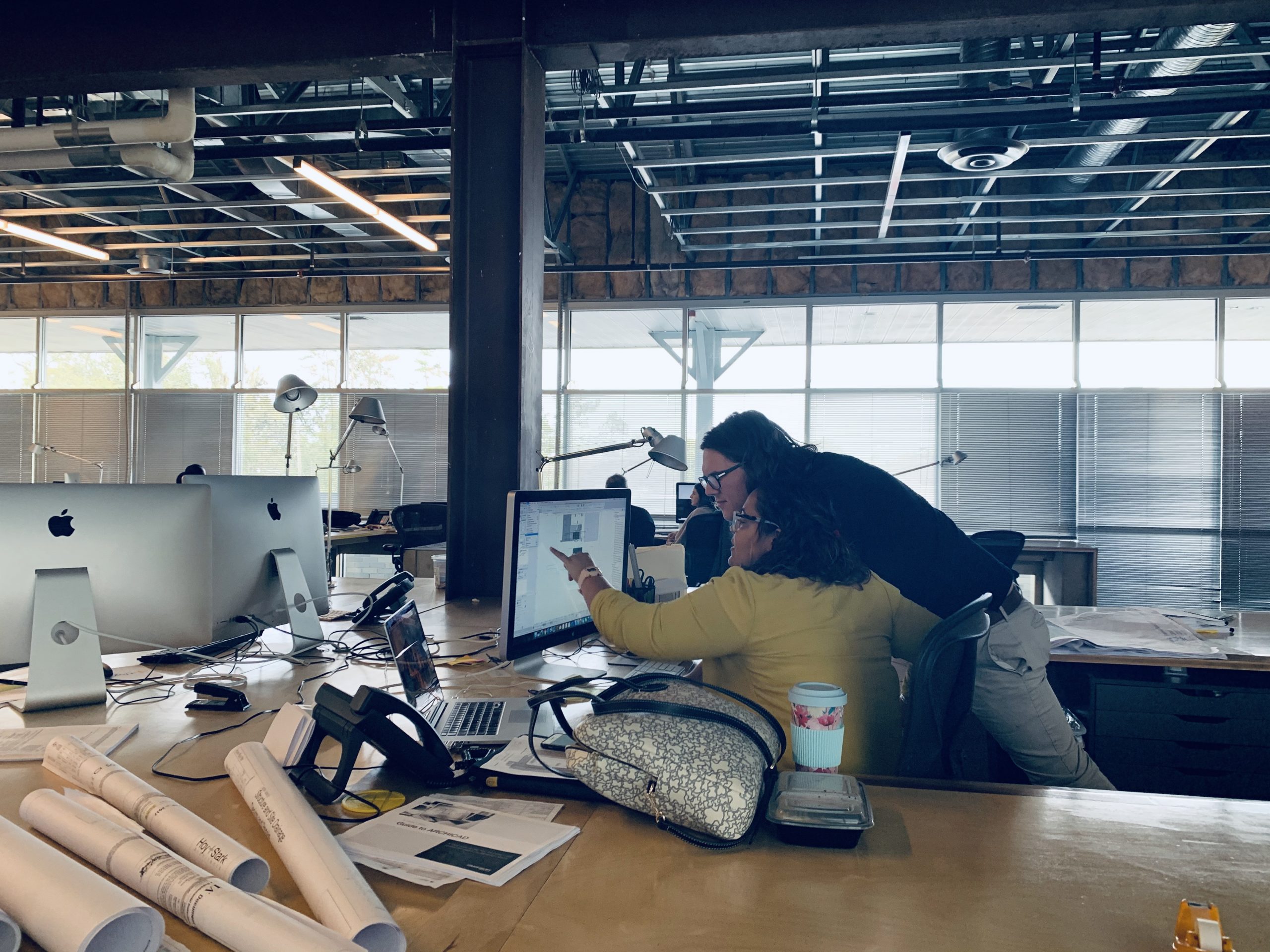 +HSHA regularly hosts tours at their Tallahassee-based office – welcoming AIAS students from FAMU. Students get an opportunity to observe the inner workings of a busy architectural firm, learn some of the processes there, and get to know the culture. Getting students in the door and showing them that it is possible to make a successful career starting with ARCHICAD skills is just one way that +HSHA is laying the groundwork to recruit new talent to their office.

During a recent tour, students got a chance to see how +HSHA uses ARCHICAD for its projects. When this happened, principal Erika Hagan says eyes lit up. “There’s a sense of excitement from the students when they discover that the software they’re learning in school is being used in a professional environment. We’ve even had some students indicate they were ready to join us, eager to apply and begin working with us.”

Hagan adds that building relationships with the students while they’re in school is a good start, but the first step is having that foundation with a local university or college first.

“As an alumnus of FAMU – I had the advantage of knowing the Assistant Dean, Andrew Chin. He has been instrumental in helping us get connected with students who are ready to enter the job market. We get resumes and portfolios quickly – set them up with interviews and hire them if they’re a fit.”

Getting to know what qualifies as a “fit” takes a holistic approach according to Monty Stark, +HSHA founding principal. Stark explains that it is helpful when hiring to look beyond the knowledge of software that many students claim to have in an interview situation.

“Academic knowledge of ARCHICAD and the skills learned during an education in an architecture school are not quite the same as professional knowledge of putting together a construction set of documents. Everyone needs time to ramp up and evolve past how things are drawn in school to how they’re drawn within the context of an architectural firm.”

Pat Hoy, firm principal at +HSHA adds that he’s keen to observe how the prospective new hire responds to the learning curve. It can, he says, indicate whether they’ll fit in to the firm culture and have a lasting career with +HSHA.

“It doesn’t matter if they claim to know Revit or ARCHICAD. We do throw them in the deep end – but we’re not going to let them drown. We do push them as hard as we can and if they meet that with a positive attitude, we know we’ve got a shot at this being a long-term employment situation.”

That deep-end experience usually highlights how different an academic understanding of a software is from a professional one.
“You can ask any new hire if what they learned in school is what they’re doing in an office setting and you’ll get the same answer – not even close. They thought they knew it, but it was the mechanics of how to walk. The extra component of how it works in the team, the detail that you have to get to can be learned only on the job in my opinion.” 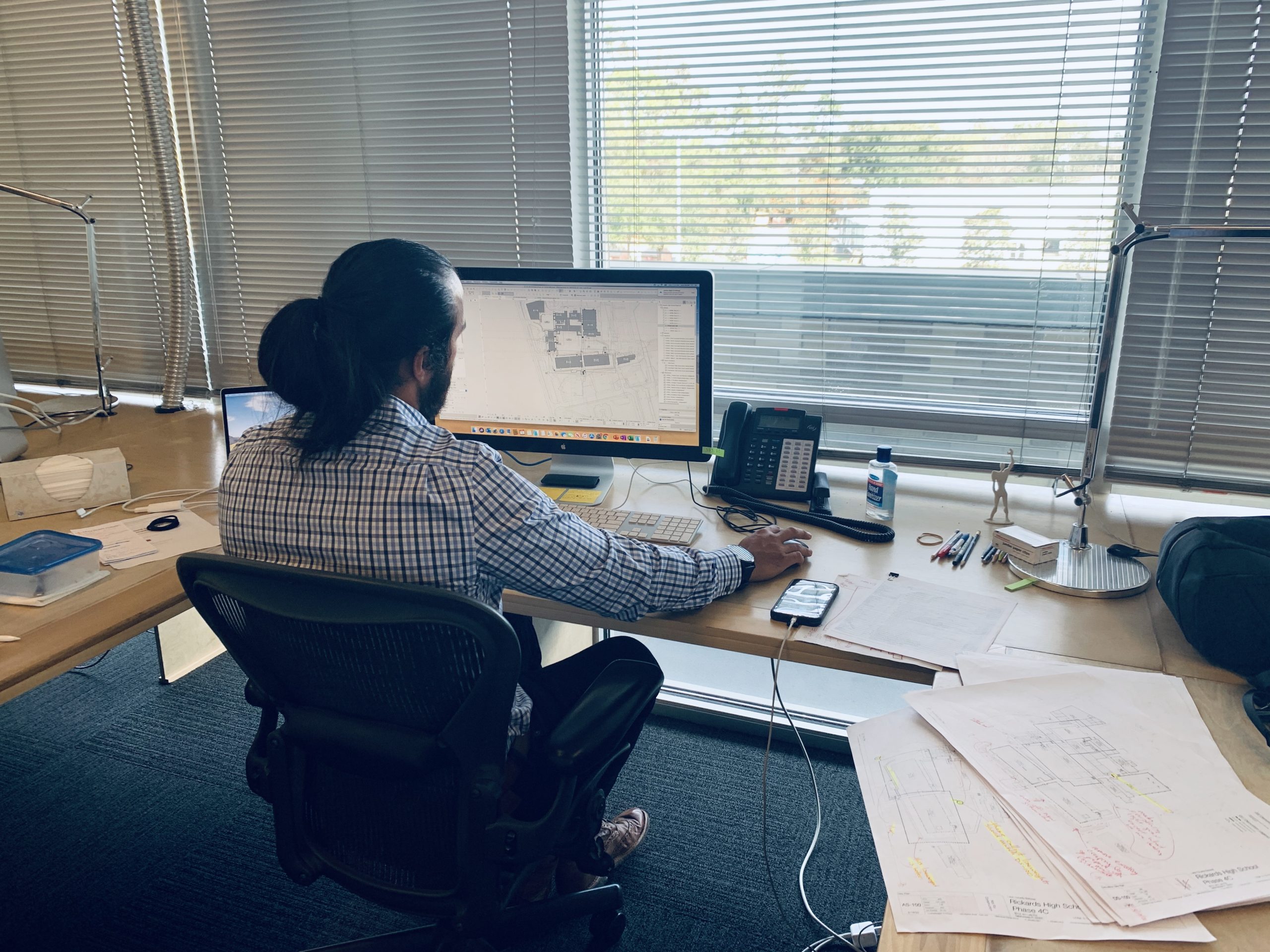 All three principals agree that the open environment of their office helps to give meaningful on-the-job training. It also assists effectively evaluation of how a student might be responding to that critical transition from being a student user to a professional user of ARCHICAD.

“New hires set up in the middle of our studio with no rooms or walls between. The open environment, that buzz of work going on inspires our team to ask questions and get answers from several people at the same time,” explains Hagan. “We give them a building to model in ARCHICAD as well as full sets of construction documents that they can thumb through. This way they get familiar with ARCHICAD and our drawing conventions.”

“The fact that we’re an open studio fosters contribution from each member of the team. The Teamwork aspect within ARCHICAD can sometimes be surprising at first use, but it too helps us coordinate within the office. One project currently in phase five has a hotlinks and reference files coming into it from about three different directions.”

+HSHA principles know that they need to get new hires up and running quickly, so they are careful when assigning work to factor in the level of complexity that goes along with it.

“We’re taking on staff that is new to the system – we let them get familiar by helping us with presentation materials is helpful. We want to establish a method so as staff learns new skills, they’re assigned different tasks to better see how it all comes together. We employ ARCHICAD’s teamwork functionality, which puts us all in the pool together. While we may ‘throw them in the deep end’ we’re also there to catch them when they jump in and swim around with us.” 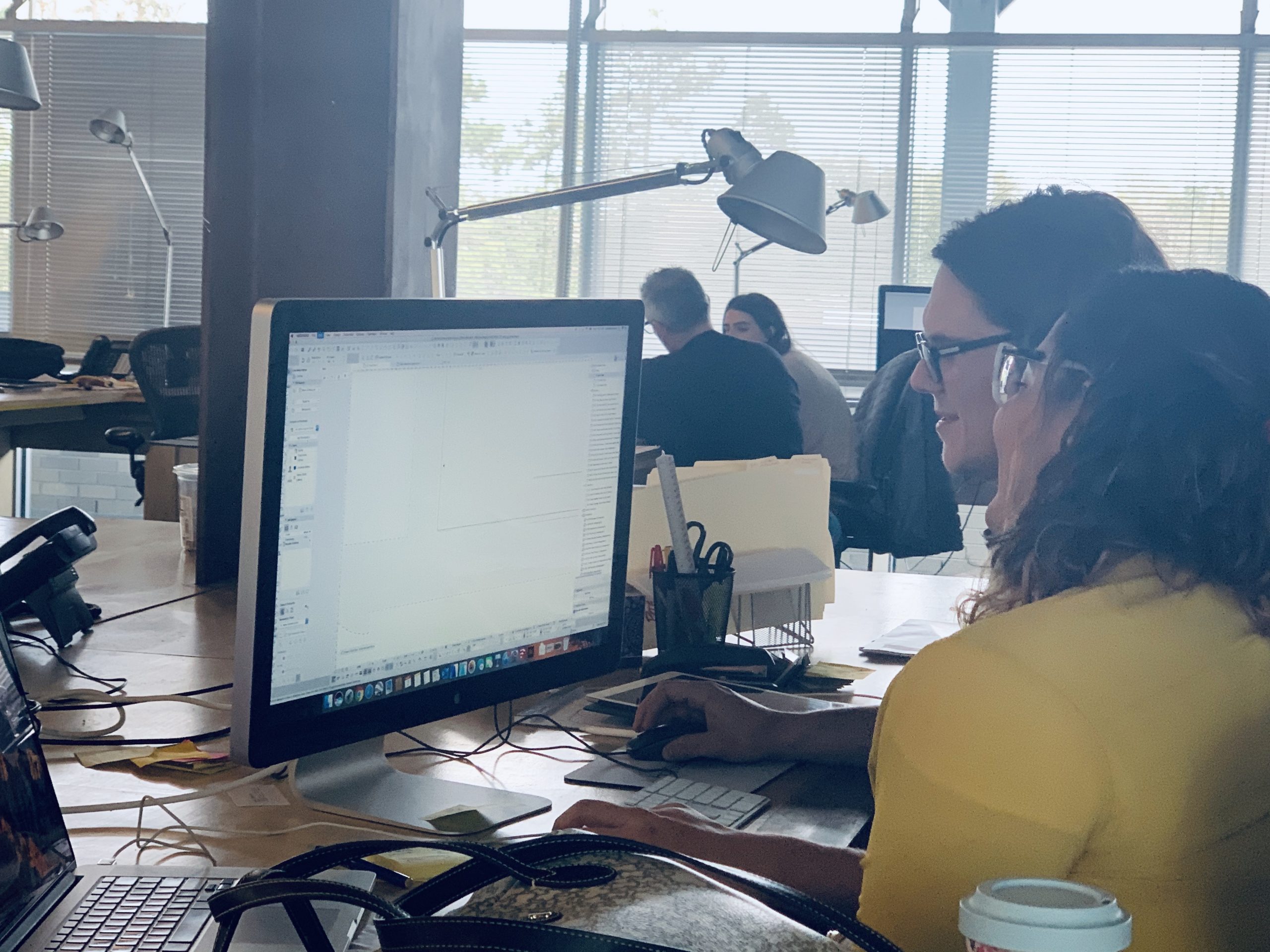 Get dedicated keys so you can be flexible and the new hires can learn on their own.

Having dedicated keys for each employee works best in the open studio environment at +HSHA. This provides flexibility and the ability to jump around from machine to machine. Most of the employees work on MacBook Pros and often take them home to study the software on their own time. Stark says this lets employees tap into their curiosity about ARCHICAD.

“They can even take the license key with them, plug it into their machine at home, and try to do some stuff as well, so lots of availability, lots of flexibility in where and when and how they can use the software and learn on it. We have a lot of printed out and/or electronic documentation of what we’ve learned in our system. It’s very well organized, almost to the point of ad nauseam sometimes it seems, as we’re trying to see how things got established and where and when and why, but we have very good record keeping. We have very good records of how all the procedures got established, and we’re sticking to it, and we’re trying to do stuff right and not cheat the system and not do it easy and then have to pay the price later, and we’re all just learning that at the same time right now.”

Stay plugged in locally with AIA, participate in architecture and education programs, volunteering

A good relationship with a local college or university can be invaluable to firms in their quest to hire new talent. So too is a meaningful connection with the local AIA chapter. +HSHA participates regularly in architecture in education programs – which keeps them involved with the students at FAMU. Volunteer events designed to expose school-aged children about architecture, giving lectures, and just being visible to students as they learn their craft can plant the seeds for a fruitful partnership down the road.

Remote learning webinars are a unique opportunity for group learning. +HSHA has had staff attend webinars as a group in their conference room. Hagan adds, “We’d love to attend more, because we’re still learning as a firm. It contributes to the team dynamic when we can learn as a group.”