This is part 3 of my GRAPHISOFT North America 2017 BIM Conference recap, if you haven’t already read them, here’s part 1 and here’s part 2. Part 4, which will probably be the conclusion is partially written. I would love to complete it by the end of May, but no promises. There’s so much to get done before my daughters go on Summer break at the end of June. 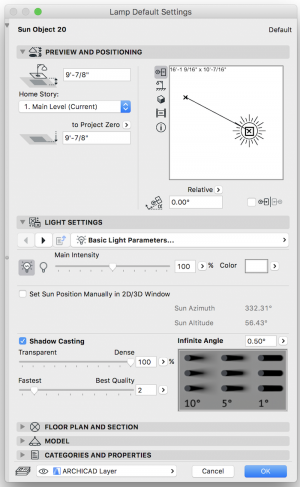 GRAPHISOFT employee and BIM Consultant Zoltan Toth once again gave a lecture on Cinerender. I attended Zoltan’s talk in 2015 and loved it. I was eager to learn from him again. If I could have, I would have sat through both of his presentations this year. I expect he will give the same talk again at the next BIM Conference, which I presume will be in 2019. It will be at the top of my list of lectures to attend, regardless of what else is being presented. A lot of what Zoltan talked about—how to set up lights, how to use the physical camera—are things that have already left my brain. But I remember just enough to explore these things on my own. I know a bit more about the ARCHICAD sun Object. I know to use it now rather than the Sun in the Cinerender settings. I can’t remember all the reasons why, but I know that’s what I should do, that it is better. I know to play around with the physical camera in the Cinerender settings to get my images to feel more like photographs than uniformly rendered images with no depth. Below are two images, the first is what my quick renderings looked like before I listened to Zoltan. The second is what my default rendering looks like now. The differences are subtle, but also important. 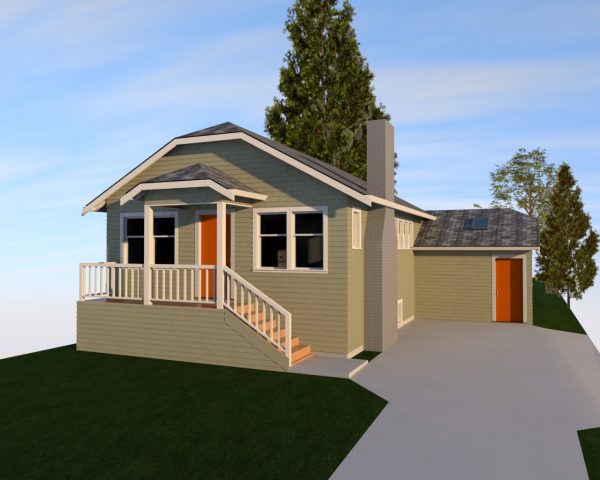 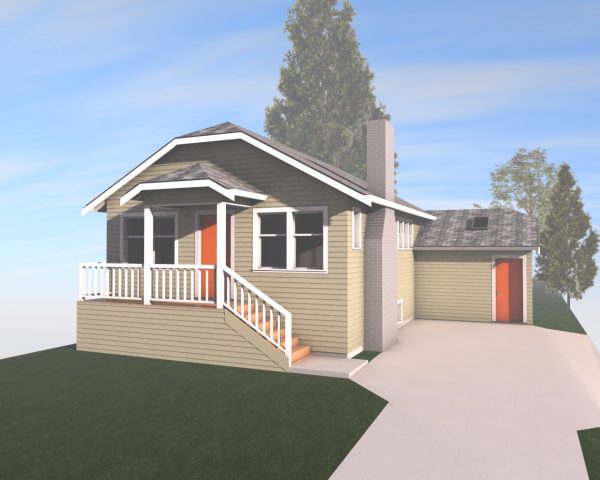 The first image feels like a model, the latter less so. There’s a softness to the second image which just feels much nicer. Since making these images, I’ve learned even more about Cinerender—Zoltan and I spent about ninety minutes discussing his lecture to improve my renderings, and for future blog posts. There’s so much we can do with Cinerender, but for now let’s keep it simple. Let’s look at some quick ways to improve your renderings. I’m not going to go into super detail on any of these techniques. Just enough to let you know they exist and encourage you to play with them. We’ll talk specifics later—and maybe Zoltan or someone who knows more about rendering can share their advice and answer questions in the comments. For now you should incorporate better renderings into your workflows by exploring the following:

Turn off the ARCHICAD sun and place the Sun Object (it’s a Lamp).

Like most Lamp Objects in ARCHICAD, the Sun Object has a lot of features. For starters let’s talk about color and shadows. In the Sun Object you can set the color of the sunlight. You can pick from predefined options (Sunrise, Moonlight, Blue Sky, etc.) or select your own color. I don’t have advice on what colors to use, but it’s easy enough to test a few out for your images. When placing the Sun Object, play with the Infinite Angle of the shadows (see image earlier in this post). You can change the hardness of the shadows using this feature. Also if you place two (or more) Sun Objects you can get more complexity if you set the Infinite Angle of the shadows to be different for each Sun. In the example below, one sun is set to 2 degrees, the other to 15 degrees. 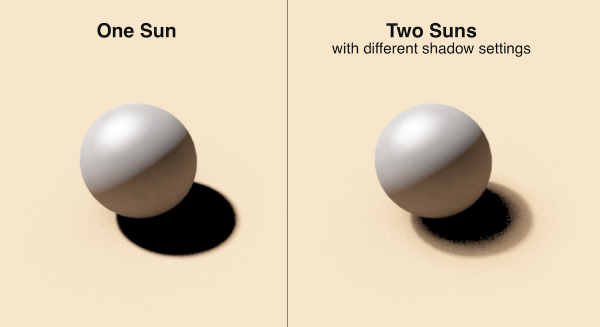 If you place two Sun Objects, make sure to decrease the Main Intensity (brightness) of each Object in its settings. Otherwise you’ll have a SUPER bright image. Also if you are using the Sun Object, remember to turn off Sunlight in the Light Adjustments settings of the PhotoRendering Settings. By using the Sun Object, your sun is now a Lamp, not the Sunlight in the PhotoRendering Settings. 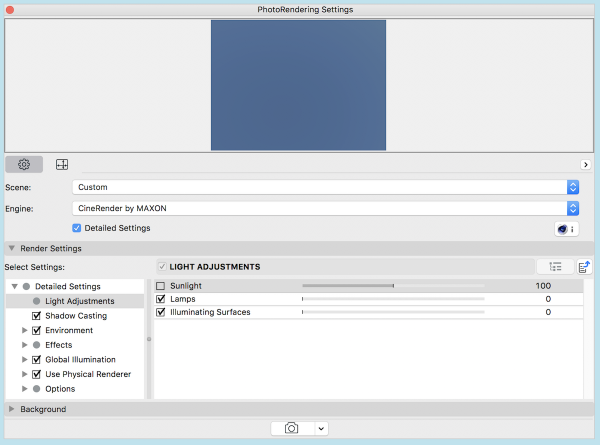 Zoltan said he doesn’t use the Window Light. He showed us how to import IES lights, but it looked unnecessary for typical renderings. Also I can’t remember what the value of the Parallel Light is (it’s very similar to the Sun Object). So for now, ignore those three. Just focus on using the Spot, Area, and General light. Those three have plenty of things to explore. Specifically in the Area Light, try out different shapes, use Illuminate One Direction Only, and read through the settings. With the Spot Light and General Light, explore how you can have the light provide only effects and no light. 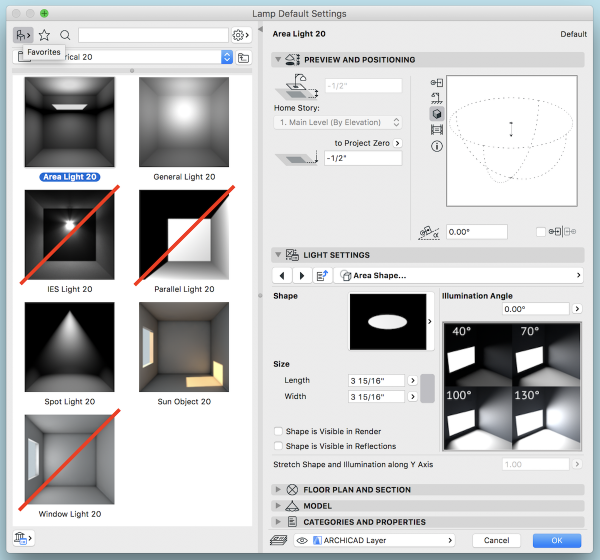 Play around with the Physical Camera Options, especially depth of field.

For some people reading this, when they realize that we can enable a Physical Camera and treat renderings in ARCHICAD like taking a photo they’ll know exactly what to do. They’ll have spent years using digital SLR cameras and their film predecessors. They’ll know exactly what changing the F-Stop will do, what’s the difference between ISO 100 and 800, and what’s the right shutter speed to select for more or less light in the rendering. For the rest of us, we might need to do some googling—or trial and error. Regardless of your comfort level with photography, turn on Use Physical Renderer and play around. The physical camera is a big part of why my second rendering above looks much better. 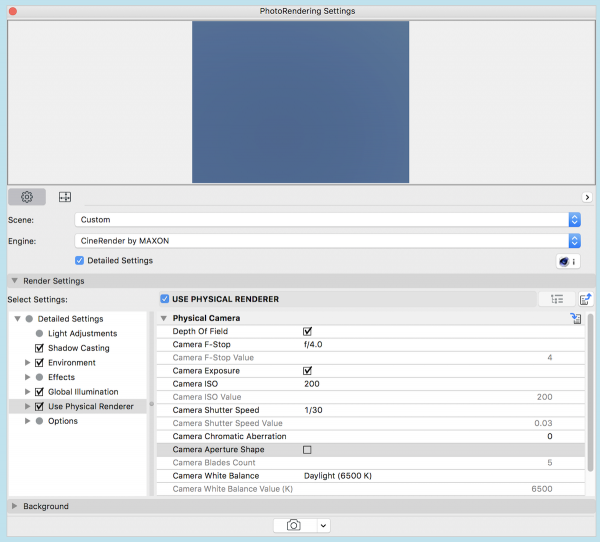 One piece of advice that stuck out from listening to Zoltan is that if your image is too dark, don’t add more lights—or increase the intensity of the lights—use the Physical Camera/Renderer to brighten the image.

Turn on those three effects and watch your renderings get instantly better. Color Mapping fixes washed out surfaces in your renderings. Ambient Occlusion will add “dirtiness/noise” to surfaces. Caustics will create patterns of light on certain surfaces. Play around with their settings if you want, or don’t. From a basic viewpoint of wanting nicer renderings with minimal effort, enabling these three settings is good enough for now. Later on, when you want to dive deeper, you can google what those terms mean, test out variations, and read entries on the Helpcenter. But that’s all a lot of work and effort. For now, just know that Zoltan tells us to use these effects. 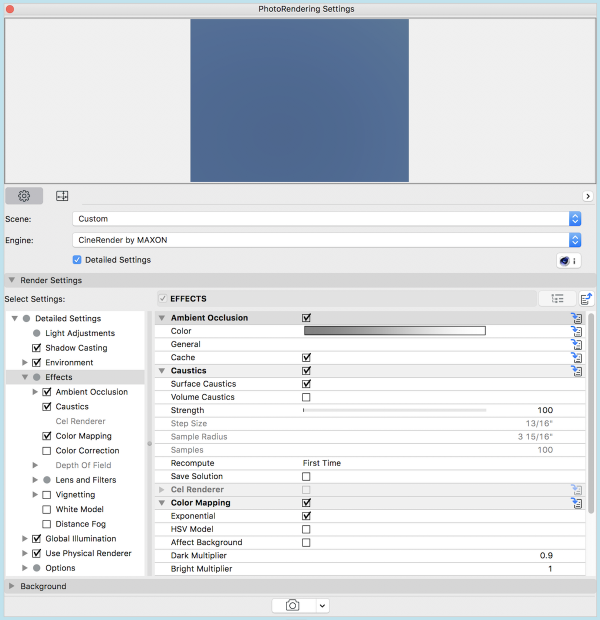 That’s it for now. Make those changes and explore their options. It’s amazing how these subtle tweaks will transform your renderings. As I digest more of what Zoltan shared—and get some practice in—I’ll write more about rendering in ARCHICAD, especially once I dive into ARCHICAD 21. ARCHICAD 21 has updated Cinerender to be based on MAXON’s Cinema 4D v18 rendering engine. Included in this update are Light Mapping and Secondary GI methods. I only vaguely know what that means, but from talking to people who do (Zoltan and some users experienced with Cinema 4D) they are very excited. So more rendering discussions to come!

Are you following GRAPHISOFT North America on Twitter? Click Here to keep track of all the latest ARCHICAD News in North America (and beyond). In addition to all the discussion of Cinerender, Zoltan also told me about Photoscape X, which is a free image post processing app for macOS. I’ve downloaded it and used it to tweak a batch of renderings (using it feels like applying Instagram filters to images on my computer). Photoscape X reminds me that I want to purchase another app: MorphX. MorphX is a little program used to morph one image into another, which would be perfect for doing before and after gifs of models. I learned about this second app from Einar Wahlstrøm Jr., a fellow ARCHICAD user—but I can’t find the original post to link to.