Messy, But Not Too

A 3,500-acre retreat in the Western Ghats of India: a 100-room lodge, a spa with 12 villas…cultural programming demonstrating the role of the music, art, and literature in promoting a sustainable way of life.

A summons from the City of Philadelphia for growing grass over ten inches high around her house, as reported by Anne Raver in the New York Times, July 20th, 2011.

A private park in upstate New York in the manner of an English estate: sculpted landforms, newly created bodies of water.

A living water park in Chengdu, China, moving 200 cubic meters of polluted river water through a natural cleansing system every day, and one of the most popular parks in the whole city.

The $45 million, ten-year Queens Plaza Pedestrian and Bicycle Improvement Project: an exercise in restoring environmental, social, and economic health to citizens scurrying below the screeching elevated trains, while weaving through eighteen lanes of furious traffic.

Landscape designer Margie Ruddick’s Wild by Design: Strategies for Creating Life-Enhancing Landscapes (Island Press), lays out the challenges she encountered in in these and other storied projects in a way that clearly reflects the title of her new book. If there’s something about the wild child embracing nature, there’s also a seasoned pro guiding highly complex projects, comfortable with “messy but not too much.”

Her method invites all the messiness of juxtapositions and overlaying patterns: the flow of people and the flow of water, the flow of traffic and the rumbling of the Elevated.

But at the same time, Ruddick brings a sense of order, a sense that the Queens Plaza had been re-imagined and designed. Ruddick ingeniously built down and up: up to increase the mass of the ground level to provide a counterweight to the mass of the elevated, creating a more human scale for pedestrians. And down for the wetlands to cleanse the water en route to the East River.

It hardly diminishes Ruddick’s achievement that she’s not the first to arrive at the wild by design concept. Frederick Nietzsche (1844-1900) famously wrote about art as the struggle between two principles, the Apollonian and Dionysian. While the god Apollo represented light and truth (read design), Dionysius, the god of wine and song, represented all that’s untamed, wild.

Even today, neuro-biologists such as Dan Siegel can show this struggle happening in the brain using various magnetic resonance imaging techniques. Consciousness, explained Siegel, is like flowing down a river. On one bank there’s strict order, on the other complete chaos. The idea is not to get hung up on either bank.

But one can see that staying in the flow, despite numerous rocks and obstacles, could be hard to do over a seven-year, forty-agency, multi-disciplinary design process. Understandably, there’s a certain feeling of triumph in rising to the occasion. The challenge presented by wild by design, by the contesting principles of Dionysian and Apollonian, may explain why some architects claim that the more constraints they’re faced with, the better the results turn out to be. All their jets are on!

The reinvention of Queens Plaza, as set forth by New York City’s Department of City Planning, represented one of these super-challenging prize projects, won by Ruddick and her design team in 2003: Sandro Marpillero and Linda Pollak (architecture and urban design), Leni Schwendinger (lighting), and Michael Singer (art).

“The goal was to humanize the massive swath of concrete and metal,” writes Ruddick, “the massive roadbeds, the elevated train tracks, the bridge …” and “to mitigate the noise and pollution from traffic on and off the Queensboro Bridge and the sound of the elevated trains as they whirled around the Plaza.”

And to accomplish this–while managing so many stakeholders in this process—she writes, required an over-arching vision—one that would keep her team, along with umpteen city agencies, community groups, and approval bodies circling back to the transformation she had in mind. With so many players, design-by-committee would have let too much fall through the cracks. There’s messy—and then there’s too messy.

“The one-mile corridor of Queens Boulevard that runs from Sunnyside Yards in Long Island City to the East River has traditionally been not only inhospitable but dangerous,” she writes. “Crossing the many lanes of traffic, some of which took unpredictable curving turns up onto the Queensboro Bridge, could be deadly, as several traffic deaths over the years proved.”

In storms, rainwater would fall from the overhead fifty feet onto heads below, and late at night, a bus from Rikers Island would unload newly released prisoners, as sex workers darted here and there. Ruddick started feeling overwhelmed, there in the shadow of the elevated. She needed to step back and erase in her mind the place as it existed to reimagine it dismantled. It wasn’t a matter of simply rearranging the urban furniture. “You have to say, “This place once was a tangled, prohibitive mess, but it is going to be a park, a gateway, and a beautiful link between two boroughs.”

One recalls Baron Haussmann’s’ dismantling of the medieval mess that was nineteenth-century Paris to create handsome boulevards. His dismantling and reinvention brought up the tax base, a fact New York City Mayor Bloomberg was not indifferent to. For who wouldn’t want a smart apartment on the Champs-Élysées? Or an office tower with up-close views of Manhattan? And, sure enough, the massage parlors and quick loan joints that were Queens Plaza have since given way to Jet Blue’s new headquarters and a major hotel under construction.

Still, one has to wonder: if Ruddick’s reimagining could make such the sad song of asphalt and steel so much better, why didn’t the Department of Planning go all the way and put the elevated underground? That way you’re creating prime real estate with river views right across from 59th Street in Manhattan. Tempting, but just think: the much-ballyhooed 2nd Avenue subway is still incomplete and it’s been decades in the making. By the time the Queens Plaza elevated went underground, the street walkers would have long since retired!

Besides, the elevated has become a piece of industrial romanticism, like Paris’s Pompidou Centre, evoking not so much shriek as chic. For the optimism that accompanied the machine age still tugs at our hearts: how the world might change with all these modern inventions!

For the purpose of writing this piece, we asked Margie Ruddick if she would return to visit the Plaza. How does she experience it now, five years since the completion of her decade-long project that began in 2002, when even the memory of that endless caravan of Con Ed trucks has faded? Here, then, is her emailed take on how her wild by design has turned out so far:

“The buildings are low in this neighborhood of Long Island City, the sky expansive—from some spots you see the shiny steel turrets of the Queensboro Bridge marching through the air into the dense volume of Midtown Manhattan skyscrapers. Walking east toward Queens Plaza from the East River, the contrast between the open air and the darkened asphalt beneath the bridge is striking.

A mass of sumac grows wild along the hulking stone base of the bridge, reaching up toward the span. You don’t know if these are weed trees— it looks as if they may have grown on their own. But as you travel east along Queens Boulevard, a more ordered ribbon of green pulls you along the median between traffic lanes, through the space. People on bikes ride the sliver of space between street trees and raised plantings toward the bridge; mostly they coast, slowing down as they approach the ramp. There is a cacophony of cars, trucks, buses on the roadbed—but the soft lushness of the vegetation somehow dampens it.

You see people sitting quietly on benches under the street trees along the median, eating their lunch, drinking coffee, on their phones—with all that bustle only feet away. Others crisscross the Boulevard at the striped crosswalks, waiting beside the lines of plantings for the light to change. Because the plantings are raised on the roadbed side, you feel buffered from the noise and soot of the street. As you walk uphill, you see people peering down as they cross overhead along the pedestrian bridge to the train. In the shadow under the broad bridge overpass, cars jockey for lanes as they merge.

The heavy structure gives way to a tangle of dark-green steel, as the elevated train begins its curve around Queens Plaza, and around the small park that is called Dutch Kills Green. The lighter steel spans allow for shafts of light to reach the roadway. As the train nears the curve, it lets out a high-pitched shriek—many call it ”the screech”— but no one seems to flinch. People are used to the flows here of traffic, of noise, of massive infrastructure.

At Dutch Kills Green, the narrow median widens into a bowl, a rich green refuge. People walking with purpose—to get somewhere— hustle along the broad path through the middle. But others stroll more aimlessly up a meandering path to the left, finding a place to sit in the quieter space that rises up several feet over the main path. The plantings are wild and kind of unruly, small trees arc over the path, songbirds dodge among the branches.

It is a mosaic of textures and colors and you can feel as if you are disappearing into all this green. To the right of the main path. a steel walkway, like a catwalk, zigzags out over low-lying ground, where a mix of green shoots and flowers grow up toward your feet. People find places to sit on the benches that cantilever out over the low land, which is actually a wetland. You might see a plant that found its way here on its own, a seed borne by a bird or the wind, like a canna, one of those tropical red-blooming plants you see in people’s backyards. The place is a sanctuary—in the middle of all this noise and movement—for wayward tropical plants as well as for people and birds.

Here in this same place, thanks to Ruddick, her team, her myriad stakeholders, meetings attended and memos dispatched, the not-too-messy mess of it all, we find ourselves in the same place. Our stream of consciousness flows easily between the banks of order and chaos, even when stopping momentarily on one of the over-scaled benches. And thanks to Nietzsche, we come to understand that while Dionysius frolics drunkenly with wine and song here at Queens Plaza, Apollo, the sun god radiates truth and masterful design.

Such are the principles behind Ruddick’s book and work, both of which we will explore in greater detail next month. 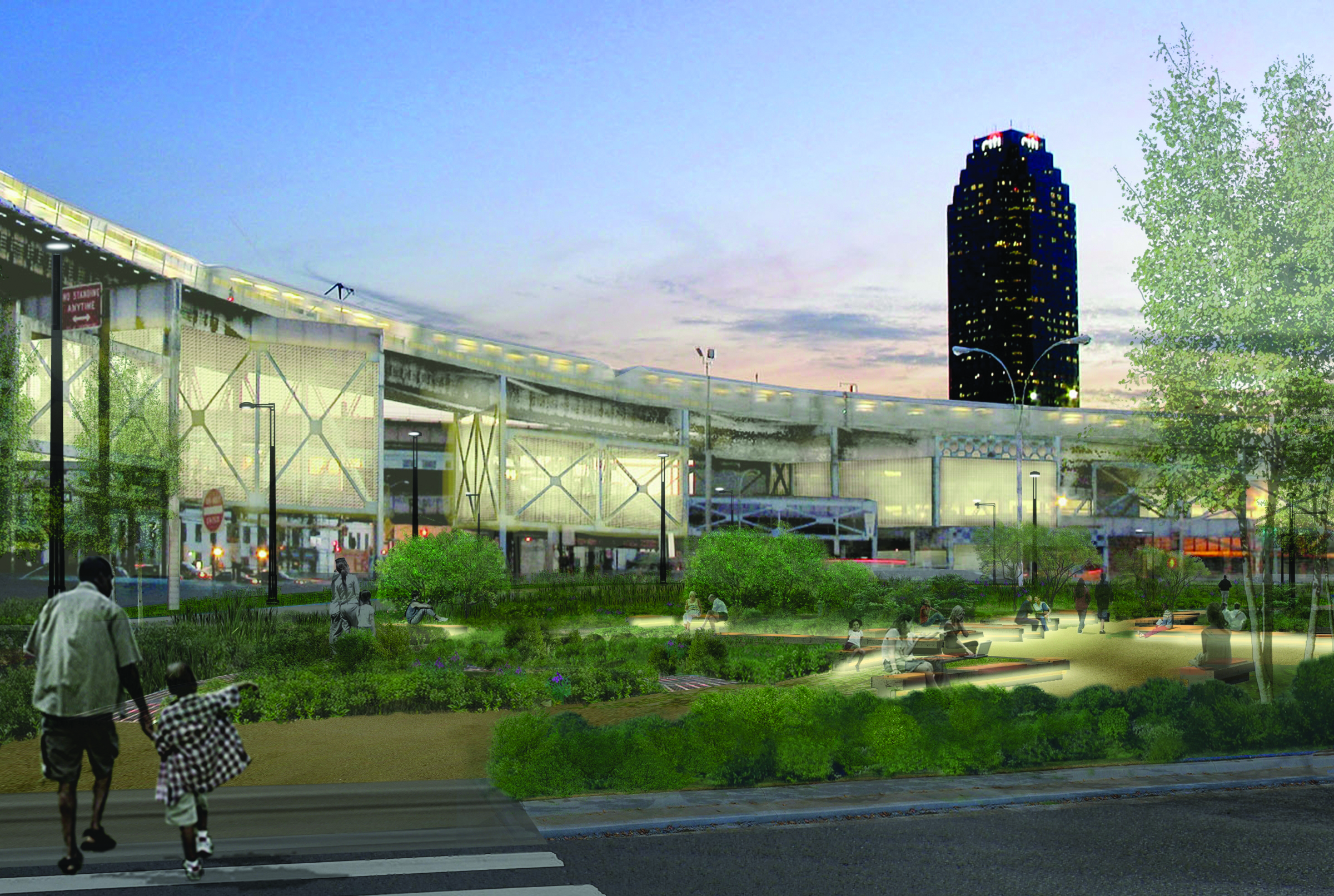