Once the curtains lifted and the explosive, starburst chandeliers had risen to the ceiling, Plácido Domingo, Renée Fleming and Dmitri Hvorostovsky brought cheers and tears at the Met’s fiftieth anniversary gala at Lincoln Center this year. Baritone Hvorostovsky in a surprise return, despite a brain tumor, sang “Cortigiani, vil razza dannata” from Verdi’s Rigoletto.

In September 1966, architect Tadeusz “Tad” Leski joined a similar crowd of 3,800 for the world premiere of Samuel Barber’s Antony and Cleopatra for the Met’s opening night.

The backstory, however, was hardly so glamorous, according to his architect daughter Kyna. A Pole who fought valiantly in the French Resistance during WWII, Tad Leski was used to improvising under pressure. But as the designer for Lincoln Center and the Met for the firm Harrison and Abramovitz, her dad found himself in a very tight spot, even for him. 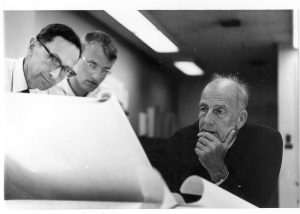 Having proposed forty-three designs accompanied by innumerable perspective sketches for John D. Rockefeller III and the Lincoln Center board, he was finally seeing some resolution. The long-standing war between modern and traditional architecture was approaching a truce. But then, just before his next meeting with Rockefeller, Leski splattered a white blob across one of the final sketches.

While some perfectionists might have caved, Leski’s right brain caused him to realize a cosmic connection, to dab the mess, draw some white lines through it and transform it into a chandelier of white light on the scale of the Big Bang, for which physical evidence just happened to be appearing, adds Kyna.

“Let’s go with that,” said Rockefeller at the meeting shortly thereafter. 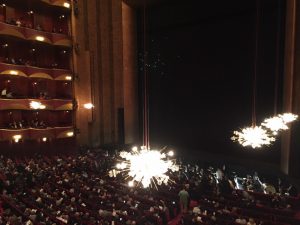 Dropped chandeliers at the Met

Now that the curtain has descended on those distant ’60s and the stage has gone dark, do we still have room for the kind of creative insight that brought us the chandeliers at Lincoln Center, or has design creativity been oversold?

Kyna, a professor and former head of the architecture department at RISD, whose design firm 3six0, has won no less than nine AIA awards, has championed the central role of the creative process throughout her career. Her examination of how that role unfolds entitled The Storm of Creativity: Simplicity: Design, Technology, Business, Life (MIT Press, 2015), describes it as the act of unlearning old notions, embracing the unknown, tuning into the synchronicities and hidden connections of life.

That said, there are any number of cultural dikes and levees warding off such storms of creativity. Leski feels such storms make the difference between “mindless production” in architecture and “something new and meaningful, open to that bolt of lightning.” In her view, creative solutions to increasingly complex problems can hardly be taken for granted in 2017.

So, what specifically, in my view, are some of the dikes and levees that prevent us from welcoming the creative storm into our studios?

Kyna Leski was certainly not looking for a lifestyle choice when she graduated from Cooper Union in 1985. She was ready to launch into the vortex of the creative storm but found herself in a stultifying big-firm drafting job with limited prospects, which prompted her to go back to for a degree at Harvard’s Graduate School of Design shortly thereafter.

As an educator, it would be hard to imagine her argue with Dickinson that there are plenty of creative jobs out there if only one looked. She would insist, however, that this depressing fact does not detract from the importance of creative storms, from droplets of impressions, sensations, and memories to a full-blown vortex that changes everything.

“All the professions are suffering, not just in architecture,” she says. Production efficiency takes precedence in almost any field from medicine to law, accidental blotches of paint are just that, nothing more. And in crisis situations — environment, population, inequality — she concedes that in some cases mass production and formalized checklists such as LEED for sustainability may be the right response.

She recalls getting caught up in production mode herself. Growing up, she drew with her father. And she became increasingly proficient. In her first year at Cooper Union, the class was required to draw self-portraits and hang them up. “Which one do you want to talk about?” asked the professor. The class all pointed to Kyna’s.

“I don’t know why you chose that one,” exclaimed the professor, “it’s visually retarded!”

And, indeed, Leski admits, her self-portrait though skilled, didn’t involve a search, of being in the moment and asking questions. This how her 3six0 architectural practice in Providence, R.I., works to this day. Every project involves setting pre-conceived notions aside and asking a lot of questions. There has to be an aha moment. She asks of this of her RISD students as well. Look at the trees outside, she asks: how do they sit in space, how do you understand them in terms of what’s in front of you, your moving hand? “One student saw broccoli, for example, another the ‘geometry of explosive forces,’ and another a giant lung inhaling CO2 and exhaling oxygen.” 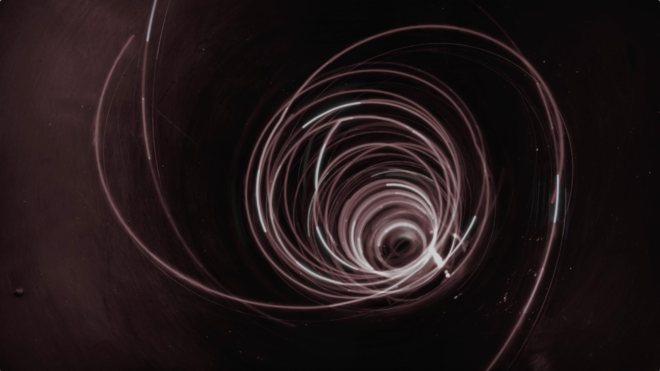 One 3six0 design project in 2008, a chapel and pavilion for Shepherd of the Valley in Hope, R.I. involved an aha moment on the same order as Tad Leski’s paint splotch chandeliers for the Met. “Every time we carried the model to meetings in the car, our little hand-made spire would fall off,” said Kyna. “I got to wondering, ‘what is a spire’ anyway?”

Kyna looked it up in Webster’s. Etymology, she says, causes her to pause before doing, which is itself a way of getting off the design production line. Spire, she found, shares the same root as respire and inspire — to breathe— and it’s also connected to spiral.

The Shepherd of the Valley certainly needed to breathe, but did it require a spire or a spiral? The congregation fused two occasionally feuding parishes in a prefab 1970s “nightmare” according to Leski. “We designed the pavilion as a multi-functional space set on a trapezoidal footprint that could not be changed.” But by reimagining the trapezoid’s converging sides squared off geometrically, Leski found she could create a spiral within the space. Windows get closer and closer, narrower and narrower, culminating in an open skylight. The result: no spire or steeple, though inside the pavilion worshippers had by all accounts found an inspiring space to breathe as one.

Leski, in turn, found inspiration in the 1646 parish church of San Carlo alle Quattro Fontane (Saint Charles at the Four Fountains) in Rome, by Francesco Borromini. Architectural historian and GSD professor Robin Evans (1944–1993) made her realize how creative Borromini had been, that great Baroque was hardly a predictable rubber-stamped style, but one that involved an intense artistic struggle. Based on the drawings of the insanely complex interior of Quattro Fontane, where exactly to fit one’s compass point to find the center, given the ellipse on the ground was not the same as one moves up the various levels of the church?

Borromini’s ability to come up with creative solutions to such problems is that a thing that can’t be taught, says Leski, having little to do with skill or knowledge. However, it’s important to understand that our own individual biographies yield unique perspectives and out of those perspectives comes an ability to make connections leading to the aha moment, the full blast of the creative storm.

“Take, for example, the biography of Katy Payne at Cornell,” says Leski. “How did she create a breakthrough for conservationists by learning the hushed language of forest elephants in the remotest regions of the Central African Republic? She could hear what no one else could. Payne could hear the air shudder. It reminded her of the low notes of the Quaker organ she heard in church growing up. That was how the connection was made,” says Leski.

Her next book after to follow her The Making of Design Principles (2007) and The Storm of Creativity? Leski hopes to examine more of these connection-making, biography-rooted phenomena close-up as “fields”. How personal narratives inform the creative process in design and elsewhere. “I’m interested in what we tune into,” she says. For those who lucky enough to tune into the singers at the Met’s fiftieth, what one wonders will come of that, precipitating what design storm, as her father’s cosmically explosive chandeliers descend with the final curtain?