What makes cities exciting, poetic, worth waking up for? The short answer is lights at night.

At 1 a.m., a bedsheet hung up to dry in Venice reflects the moon over a canal (reflected once more in the water). We are enchanted, mesmerized. At 2 a.m., a smashed window in a forlorn Cleveland underpass twinkles like a star. We don’t back away, afraid, but instinctually draw nearer. At 2:17, a.m., in Paris, the City of Light, a Belle Époque candelabra on the Pont Alexandre appears to bow its beams ever so slightly, engaged in deep conversation with a vagabond.

At 2:45 a.m., headlights fly like suns down a London street Orange neon from the Odeon Restaurant in New York City turns rain into romance. Is this what inspired Jay McInerney to write his 1984 classic Bright Lights, Big City? Had to be. 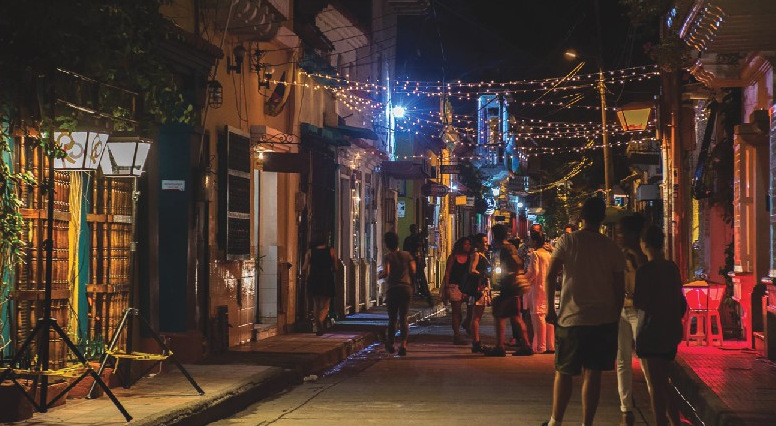 And, a full hour later, at 4:15 in the 2011 Queens City Plaza project we’ve been writing about, illuminated trees and concrete benches create a jazzy rhythm that never fails to draw out pedestrians and bicyclists unfazed by the psychic blast of the elevated subways and four-lane traffic.

As increasingly hot nights keep people out of doors longer, and with high-tech making the search for real connection and community even more compelling, lit public spaces such as these have become increasingly important–for a sense of safety, for clearly defined spatial relations, and for wayfinding, not to mention the built environment at its arguably most exciting, poetic, and worth waking up for.

Nevertheless, night lighting the city is not on every practitioner’s daytime drawing board. This even though advances in LED’s have dramatically lowered energy use, and the careful use of down-lighting to keep light from leaking into the sky, confusing birds and confounding amateur astronomers.

“When we’re asked to think about a place, we don’t think about it at night unless we’re specifically asked to,” says Leni Schwendinger, the lighting designer who helped transform Queens City Plaza. While we don’t necessarily picture places first as they appear at night, city nightscapes can be the most exciting spaces and places in the world. Schwendinger’s hope is that designers, architects, engineers, urban planners, developers will realize that nighttime is an existing condition, like curb cuts, and one that needs to be addressed. She notes that while there are strict regulations in New York for lighting streets for cars, there are none for bicyclists and pedestrians. She sees this as a missed opportunity. “Innovation and creativity for bringing light to public spaces all over the world energize architecture, landscape, and urban infrastructure with the ultimate goal of connecting people to each other and their surroundings,” she writes in her bio. 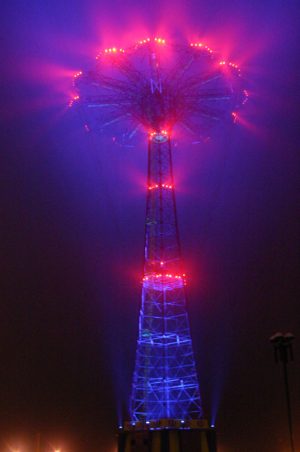 Schwendinger joined the New York office of Arup, the 13,000-person engineering, and planning firm, in 2013. As emblematic of her work as the Queens Plaza project is in showing her deft hand at turning on the switch in underutilized night spaces, she is better known for other work around the globe. Some highlights: her award-winning Dreaming in Color art installation for Seattle Center’s McCaw Hall opera and theater (2005), the night-time design for Getsemani, a World Heritage Site in Cartagena Colombia (2015), the “visual chimes” in Park MGM in Las Vegas (2016), her many films and walking events for the International Association of Lighting Designers ongoing LightMap events.

Currently, Schwendinger is working with London’s Grimshaw Architects to upgrade thirty-three subway lines in New York City. She confesses to having—like most New Yorkers—a love-hate relationship with its system, however now she says it’s mostly love. Which is a good thing because she’s been spending so much time down there lately.

Her plan is simple: Warm, Cool, Warm—a warm lighting tint as you descend into the station, cool, crisp and business-like where you buy your ticket, and then warm again as you move past the turnstiles onto the platform.  If on the Las Vegas strip, Schwendinger’s LED scheme of desert magentas, oranges, and pinks contrasts nicely with the Robert Venturi neon madness all around, the orderliness and defining nature of her Warm, Cool, Warm for subways contrasts just as effectively with the looming chasms of modern Gotham at 2 a.m.

Schwendinger loves to stroll Greenwich Village at night to work things out in her mind, emotional as well as theoretical, or meeting and chatting, or leading groups of designers to turn them on to what she calls “the vernacular”—the gleam off a light-post or a car. “A light in a bedroom window’s kind of fun,” she says. “Or storefront lights on a bunch of knick-knacks. They become transformed.”

As she recalls, it was driving around with her Dad to see Christmas lights that transformed her youth and may have set her professional trajectory. This was in Los Angeles, in the exuberant, post-war 1950s.  “I tried showing him how much our nutty dog liked the lights, just like us. ‘Dogs don’t see in color,’ my Dad said. But who cares?”

The city of angels had become just that.