ARCHICAD is the BIM software of choice for El Segundo, CA-based 3D Architectural visualization company, Spacialists, and has been since the firm opened its doors five years ago. Spacialists excels in providing Virtual Reality experiences and 3D renderings with stunningly realistic qualities, made possible by an exceptional team of experts.

To achieve world-class results, owner and founder, Philip Oloo – who has a background in architecture and interior design as well as a Master’s degree in construction management, insists on using ARCHICAD, a software he became familiar with as a student. Even if a project comes to his team in another software, they will import it or even re-create it in ARCHICAD.

Oloo says continued commitment to ARCHICAD stems from his extensive experience with BIM software. Having worked within architectural as well as design/build firms, Philip values the flexibility and ease of use that ARCHICAD delivers. As the firm has a laser focus on VR and Augmented Reality, they are confident knowing that ARCHICAD is the best BIM tool to support these immersive and experiential projects.

“Whenever clients come to us with plans, we convert them or even re-construct them in ARCHICAD. It is worth the extra effort especially when we’re preparing an immersive scene in Unreal Engine. ARCHICAD allows us to transition models into Epic’s Unreal Engine in the most efficient way possible.” 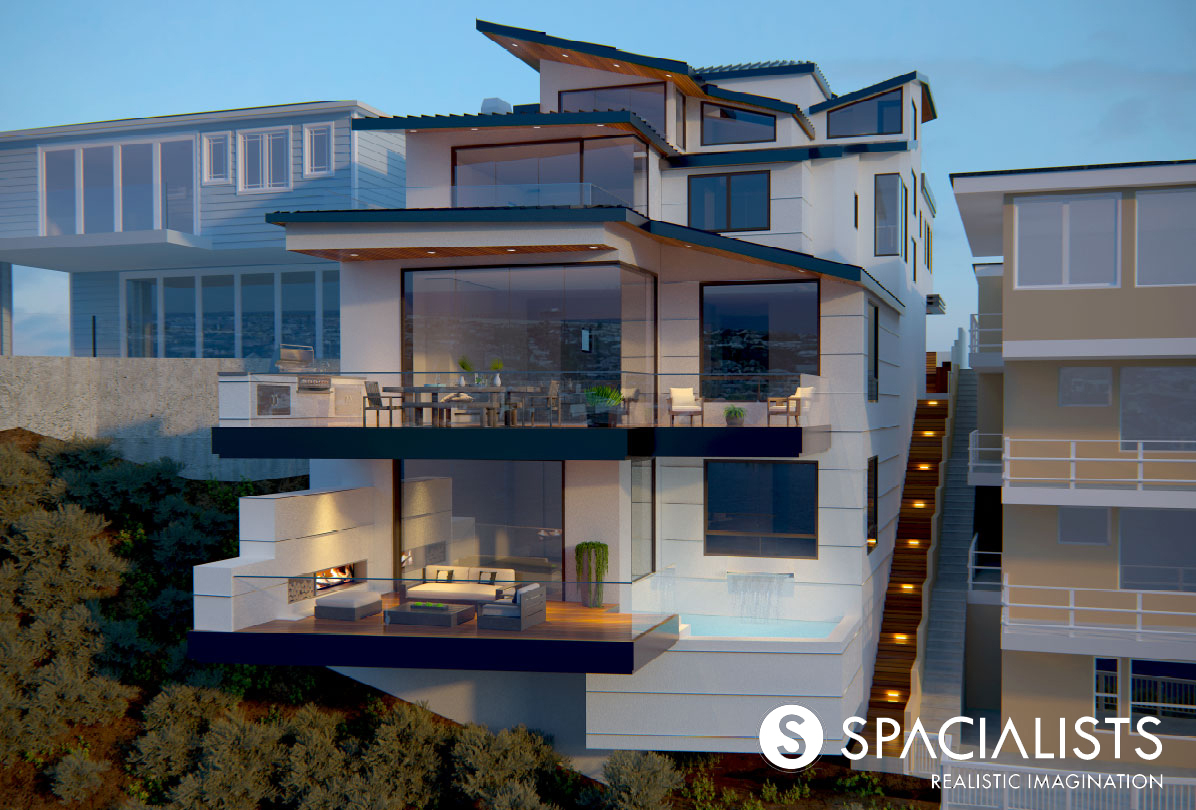 The team at Spacialists relies heavily on Unreal Engine, a gaming software by Epic Games, even though it requires extensive programming knowledge to pull off the realism demanded by the firm. ARCHICAD seamlessly integrates into Unreal Engine so that mini-architectural video game scenes can be created.

“One of the biggest benefits for us as we began using Unreal Engine was that we already developed all of our models in the ARCHICAD platform. This workflow allows us to import our models into Unreal Engine and keep our files size relatively small. We have eliminated render time by maximizing the relationship between ARCHICAD and Unreal Engine. We no longer have to render every single view in our models. Instead, Unreal Engine takes each ‘scene’ we develop based on the ARCHICAD model and ‘bakes’ it. So essentially, we render the entire experience once, in a fraction of the time traditional rendering requires and from there we can effortlessly take video as we move through the scene or even snap high resolution images as if we had a camera in our hand.”

Spacialists sets up a world in which the model exists – this lays the groundwork for any level of interactivity they want to provide their client. Using gaming technology represents a huge transition for the industry. As a result, Spacialists has ushered in a new product offering for master planned communities and developers called Virtual Showroom. “In Virtual Showroom we utilize Unreal Engine to develop the VR, and HTC’s Vive headset hardware to offer up the virtual experience, for new or potential home buyers. Wearing a headset, buyers can move through their new model home and get a feel for how it would be to live there. They can modify the surfaces with a few clicks instead of sitting in an office and looking at tiny samples of granite or flooring. Virtual Showroom allows them to customize all the finishes in their new home in an immersive experience.”

On a recent single-family home project in Corona Del Mar, CA, Oloo’s familiarity with ARCHICAD and background in architecture proved extremely valuable. While working with the developer, it became apparent that the home had an unusable deck space in the rear of the proposed structure facing the street. It lacked any means to access the otherwise usable deck. 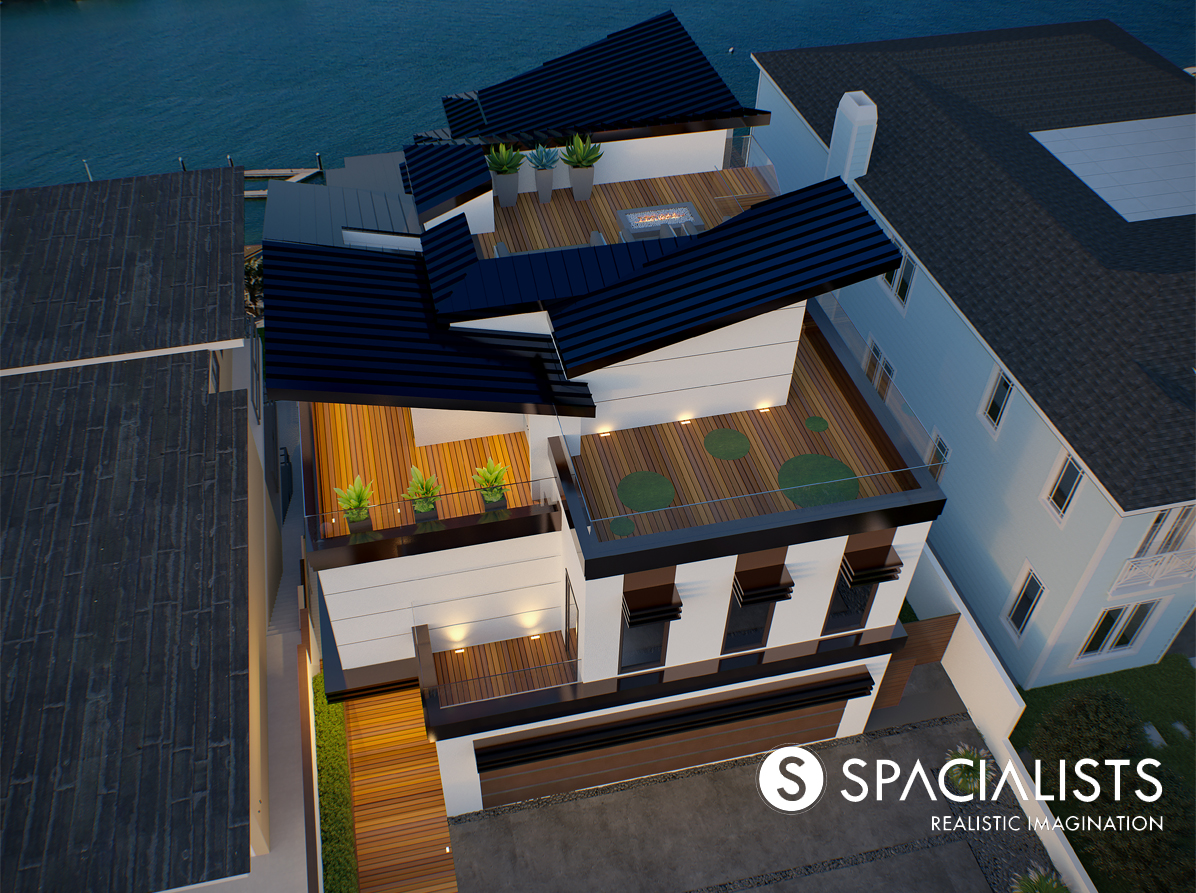 Oloo recalls, “I imported the plans into ARCHICAD as we always do, and using the software, provided a roof solution that would connect the top to the unusable deck surface without disturbing the interior dimensions. A typical rendering firm may have been able to figure out how to solve the problem of an inaccessible roof deck, but it wouldn’t have included exportable construction documents or being able to see how the modification affected internal systems and interiors. While this scenario does not represent our typical deliverable, ARCHICAD was invaluable for this project and we were pleased to be able to offer this higher level of service to our client.”

Spacialists has spent years developing their knowledge base of Virtual and Augmented Reality. In terms of a fast-moving new technology such VR and AR, even a year represents a significant length of time. To help architects develop their own VR experiences, Oloo will be offering an online class specifically demonstrating how to optimize models in ARCHICAD and import them into Unreal Engine. Beginners learn step by step how to perfect the ARCHICAD model in order to get the best results tin order to create your very first scene within Unreal Engine.