The team at Design Vision Inc. recently took part in a well-attended Home Builders Show put on by the Augusta Home Builders Association. During the free, open house event attended by local architects, interior designers, building designers, contractors, building suppliers and the general public, attendees were able to network, see new techniques in home building and thanks to Hinton’s demonstration of GRAPHISOFT’s presentation app, BIMx with added VR capability via Google Cardboard, leave impressed with the advancements in technology. 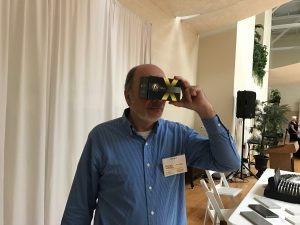 BIMx and the Wow Factor

Stephen Hinton, owner and founder of Design Vision Inc and long-time ARCHICAD user, works to make the most of what he calls “cutting edge technology” offered by GRAPHISOFT in his design of residential homes and commercial buildings in the area. Supported by a background in design and build, Hinton leans on that to in turn, support contractors. Plus, he says, it comes with a very important wow factor.

“I know what the contractor is up against and I know what they need,” explains Hinton. “ARCHICAD allows me to be able to hand the framer the 3D model on an iPad. Without question, they’re then able to see how the roof goes together behind the chimney for example. Exposing them to this technology out in the field is what’s so cool about it.”

During the show, Hinton had several monitors showing color renderings in ARCHICAD, slide shows of various designs, as well as gray-scale screen shots of both orthographic and perspective view of the front elevation of a commercial building currently in progress. The intent of this display served to illustrate why he believes everyone should design in 3D.

Images and Information Anywhere with BIMx

In addition to the monitors mentioned above, Hinton loaded BIMx on several iPhones and an iPad. On these mobile devices, Hinton showed attendees the same images he’d typically show to a client. He made sure to point out that lack of internet service creates no obstacle to using the devices on site.

“Due to the mountainous characteristic of our area, mobile service is spotty in some places. But that doesn’t stop my using BIMx on an iPad. The power of the app allows me to have multiple projects’ 3D models as well as their accompanying full construction drawing sets in the palm of my hand. Think about it, you’re a general contractor and your framer calls you to get help understanding some roof lines. With BIMx the contractor can arrive on job site, pull out his iPad and together they look at the 3D model solve the problem. Heck, if BIMx was on the framer’s iPhone and he had access to the project, as well as internet service he could see for himself. How great is that?” 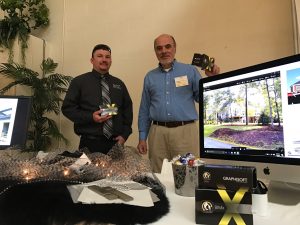 The building that was on the BIMx in Hinton’s presentation is a new two story 9,000 sq ft building he’s working on. It will become a vision center in the near future. Featuring interesting exteriors with a “craftsman” feel, while the interior takes on a more contemporary design.

Hinton adds, “Being able to “see” this building inside and out brings the project to life. The excitement is contagious!”